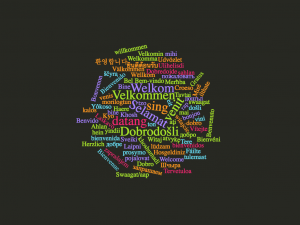 Thank you Mathew for presenting the show today, welcome to this very special episode of VoiceFirst Weekly.

During the past months availability of either Google Assistant and Alexa to different languages and regions has been constant news. The race to win in every language has never been greater. The website era will look so updated in a few years. Text to speech advances will allow and soon people will expect applications to be available in every language possible. And let’s be clear that the biggest companies in the world today are available in dozens of languages. This trend is only going to grow and be expected.

You should not have to learn English to use the internet. The next billion users expect more content in their languages.

So here’s what I think you should do, design so it can be adapted to various languages and regions with as little as possible engineering effort. This is probably the easiest part in the case of both Amazon Alexa and Google Assistant as they offer options to add languages and locales. You don’t need to have tons of messages files in your code. As long as you have the text translated it works. But that’s not enough. Working with Disney Studios taught me the landmark work and relevance of distributing content for almost every country on earth. And I learned to think upfront on internationalization not as a feature to be added later. It’s not only engineering work.

Be sure to account for all 3 fundamentals when planning, designing and writing your voice application. For voice apps on top of Google’s or Amazon’s smart assistants, distribution is embedded in the platforms, and you should probably focus more on discoverability and marketing in those locales.

The challenge for voice applications is similar in several regards to those of distributing animated movies and series. With Amazon Polly, Google Voices, Talestreamer the key is to adapt the tone for the language, culture and locale and to adapt them to the users and application context. Be mindful and respectful when translating.  Synthetic voices add a layer of communication style along with SSML, the speech synthesis markup language, a standard for styling your voices.

This is a briefings show, and episodes are short

There’s so much to cover in this topic that one episode is just not enough! It doesn’t help that this is something I’m very passionate about.

What do you do if you don’t know any other language? Thank Twitter, go there and ask for help. The voice community is incredibly helpful.

Find in the notes of this episode at voicefirstweekly.com/flashbriefing/62, Youtube and Google Assistant sounds effects, Amazon Polly synthetic speech and guides on how to add internationalization to your Google Actions and Alexa skills. I added some skills that are available in several languages and are rocking it!

Thank you for listening and we’ll talk tomorrow

P.D There is an emerging interesting category called synthetic media, stay tuned for future flash briefings in this subject. Meanwhile, Matt Hartman discuss the topic with frequency at his newsletter Hearing Voices.